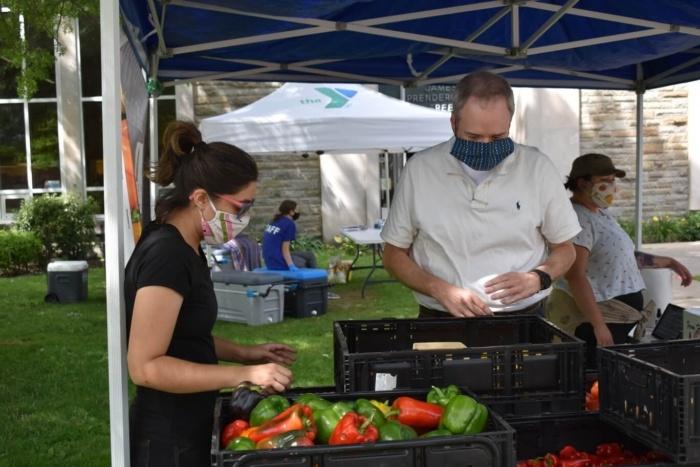 As printed in Episcopal News Service on 4/28/21

Led by its rector, the Rev. Luke Fodor, whose passion for fresh vegetables is such that people send him produce-themed birthday cards, the parish has donated money, space, time and energy to several interconnected fresh food initiatives aimed at helping local residents eat a better diet and helping local farmers to earn a better living.

“When you model things like healthy eating and healthy living, people see that they can do it,” Fodor says. “It’s kind of a slow build, but we are beginning to see it take root and grow.”

At the core of this effort is the Jamestown Public Market, which operates not only a weekly Farmers’ Market on Saturdays from June 12 to late October, but also a Mobile Market that brings low-cost, fresh, locally-grown produce to people in low income neighborhoods each Wednesday during the market season.

This year, for the first time, St. Luke’s and the market are also collaborating on a 16-week Community-Supported Agriculture arrangement, commonly known as a CSA, through which participants subscribe to the weekly harvest of a group of local farms. A portion of the proceeds from the Eat Fresh, Do Good CSA will help to fund the mobile market.

“We are happy to be at St. Luke’s,” says Linnea Carlson, who has rejuvenated the Public Market since being named director in 2018. “What the church brings that a traditional nonprofit structure may lack is that sense of connected community.”

The partnership between the church and the market was born of necessity. In 2019 the market lost its major funder, and St. Luke’s stepped into the breach, offering office space and agreeing to act as the market’s fiscal agent. In 2020, at the height of the COVID-19 pandemic, the market had its best year yet.

“When I first pitched the idea [to the parish], the response was, ‘Of course, this is what we do,” Fodor says. “We help broker relationships. We partner. We don’t have to do all the work, but we use our facility and our ability to broker things.”

But St. Luke’s commitment has been far from simply administrative. Jessica Frederick, the church’s minister for children, youth and family ministry, a former farmer who once managed her own CSA, has stepped in to lead the Eat Fresh, Do Good project.

“It was my favorite part of farming,” says Frederick, a student in the low residency program at Church Divinity School of the Pacific in Berkeley, California, who has also donated a refrigerated trailer that serves as a walk-in cooler on wheels to the Mobile Market for pick-ups and deliveries. “I loved talking to people about how to use kale and about the agricultural seasons. I loved all that. I am thrilled to be bringing that past experience into this context.”

She has brought the young people of the parish along with her. This season, the church’s youth group will help sort and package the vegetables that are collected on Wednesday morning at local farms to be sold at reduced prices through the Mobile Market and distributed through the CSA. Young people from the St. Luke’s-First Presbyterian Youth Group also sponsor the Sprouts Tent, an outpost of children’s activities at the Saturday Farmers’ Market, and a recent confirmation class participated in the Public Market’s Grow Jamestown project, planting and tending garlic in several community gardens around town.

“The work goes above and beyond talk,” Fodor says. “It’s in the doing. Taking part in the market has become part of theological education at St. Luke’s, and that’s true from the pulpit to adult formation to faith formation for our young people.”

The need for a change in what Fodor refers to as the local “food culture” is evident. Jamestown is the largest city in Chautauqua County, which ranks near the top of New York’s 62 counties in the percentage of residents with diet-related health concerns such as diabetes, obesity and heart disease.

Although there are farms throughout the region, fresh food is difficult to purchase for many city residents, especially the 16 percent who do not own a car. Local farmers could help to supply this need, but they face significant challenges in finding a market for their harvests in a food system dominated by grocery chains.

The Public Market tries to bridge these gaps, in part by making fresh food more easily available to people who do not live near markets, and in part by tempting customers away from the grocery chains to buy the harvest of local fields. The former is easier than the latter, Carlson says.

“The success of the Mobile Market is that we did just show up,” she says. “The majority of our customers say they learned about us by just walking by.” Mobile Market customers will have an easier time purchasing produce this year than in the past because the mobile operation is now equipped to accept food stamps from the Supplemental Nutritional Assistance Program.
Selling the CSA can be trickier. In her days managing the CSA for her farm near Sherman, New York, Frederick says she sometimes found that she had to persuade people not used to thinking about local food systems that it was important to “buy their lettuce from me, instead of buying it from Wegman’s.”

Not everyone was interested in hearing about the importance of preserving the nutrients in local soils, yet she persisted. “So much about the way our economy works disempowers consumers,” she says. “Supporting local food systems is something people have so much power over.”

That message is being heard by supporters of the Eat Fresh, Do Good CSA, which currently has 34 participants, 21 of them from the St. Luke’s congregation.

For Fodor, drawing the food that goes out to low-income neighborhoods through the Mobile Market and the food sold through the CSA from the same day’s collection illustrates an important point, not only about local food systems, but about the nature of Christian community.

“We can all come together around food, equity, justice and inclusion,” he says. “We can all be part of the same self-sustaining system, eating together at the same imaginary table.”

We use cookies on our website to give you the most relevant experience by remembering your preferences and repeat visits. By clicking “Accept All”, you consent to the use of ALL the cookies. However, you may visit "Cookie Settings" to provide a controlled consent.
Cookie SettingsAccept All
Manage consent

This website uses cookies to improve your experience while you navigate through the website. Out of these, the cookies that are categorized as necessary are stored on your browser as they are essential for the working of basic functionalities of the website. We also use third-party cookies that help us analyze and understand how you use this website. These cookies will be stored in your browser only with your consent. You also have the option to opt-out of these cookies. But opting out of some of these cookies may affect your browsing experience.
Necessary Always Enabled
Necessary cookies are absolutely essential for the website to function properly. These cookies ensure basic functionalities and security features of the website, anonymously.
Functional
Functional cookies help to perform certain functionalities like sharing the content of the website on social media platforms, collect feedbacks, and other third-party features.
Performance
Performance cookies are used to understand and analyze the key performance indexes of the website which helps in delivering a better user experience for the visitors.
Analytics
Analytical cookies are used to understand how visitors interact with the website. These cookies help provide information on metrics the number of visitors, bounce rate, traffic source, etc.
Advertisement
Advertisement cookies are used to provide visitors with relevant ads and marketing campaigns. These cookies track visitors across websites and collect information to provide customized ads.
Others
Other uncategorized cookies are those that are being analyzed and have not been classified into a category as yet.
SAVE & ACCEPT
Skip to content