Repairs To St. Luke’s Bell Tower To Start Next Spring 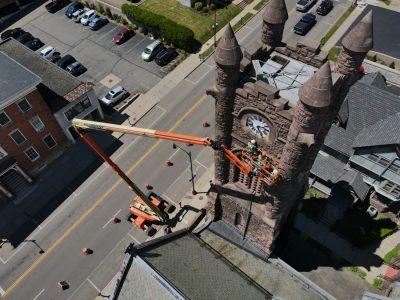 Water damage due to the original design and construction of the 1894 structure will lead St. Luke’s Episcopal Church officials to fund a $900,000 project to fix the top two levels of its bell tower.

Last week, Barbara Campagna of BAC A+P architectural firm and Jenna Bresler of Silman structural engineers presented a presentation via Zoom on the repairs needed to the church’s bell tower.

Bresler said because of the water damage occurring for more than 100 years, separation between brick and the Medina sandstone — in some areas as much as 4 inches — has created voids in the structure that need to be repaired.

Campagna said the “safe hazard work” needs to be done to prevent the structure from starting to deteriorate to the point where parts of the structure might start falling off. She said based on visual examination done last spring by structural engineers, it doesn’t appear that any stones are in any imminent danger of falling.

“We don’t know when the tipping point might be, which you don’t ever want to have,” she said.

Campagna said a lot of the water damage done to the Jamestown church is based on the original design and construction of the church and doesn’t directly deal with the tower being struck by lightning in 2013. Bresler said the restoration plan is to disassemble parts of the Medina sandstone and rebuild the stone and clean up the mortar.

The presentation also discussed the damage that has been done to the porch, staircase, ramp and roofing and interior plaster, which also needs to be repaired. However, Campagna said due to the COVID-19 pandemic disrupting the supply chain, they’re unsure how long it would take to get all of the supplies needed to renovate the whole church. She said the plan is to do Phase 1-A repairs to fix the top of the bell towers. She added the project estimate to do the work would be around $900,000.

Campagna said the next step is to meet with New York State Historic Preservation Office officials to gain approval for the renovation plans, which is needed because the church is listed on the National Register of Historic Places because it’s located inside the Downtown Jamestown Historic District. After they receive state official’s approval, she said the project will go out to bid, with plans to possibly start renovation work in the spring of 2022.

The Rev. Luke Fodor, St. Luke’s Episcopal Church pastor, said because St. Luke’s has received a couple of state grants and through fundraising, church officials have $700,000 for the project. He said if the funding gap is closed the church can use its endowment to fund the project.

“I believe God is good and we will find other ways to get there,” he said.

Campagna said the complete cost to fund the whole renovation project for the church will cost around $2 million. She said the other areas can wait to be repaired because they aren’t a public safety concern.

Other agencies involved in the project include the associate architect firm is Watts Architecture & Engineering of Buffalo, geotechnical consultant Barron and Associates of Clarence and architectural conservator is Jablonski Building Conservation of New York City.

We use cookies on our website to give you the most relevant experience by remembering your preferences and repeat visits. By clicking “Accept All”, you consent to the use of ALL the cookies. However, you may visit "Cookie Settings" to provide a controlled consent.
Cookie SettingsAccept All
Manage consent

This website uses cookies to improve your experience while you navigate through the website. Out of these, the cookies that are categorized as necessary are stored on your browser as they are essential for the working of basic functionalities of the website. We also use third-party cookies that help us analyze and understand how you use this website. These cookies will be stored in your browser only with your consent. You also have the option to opt-out of these cookies. But opting out of some of these cookies may affect your browsing experience.
Necessary Always Enabled
Necessary cookies are absolutely essential for the website to function properly. These cookies ensure basic functionalities and security features of the website, anonymously.
Functional
Functional cookies help to perform certain functionalities like sharing the content of the website on social media platforms, collect feedbacks, and other third-party features.
Performance
Performance cookies are used to understand and analyze the key performance indexes of the website which helps in delivering a better user experience for the visitors.
Analytics
Analytical cookies are used to understand how visitors interact with the website. These cookies help provide information on metrics the number of visitors, bounce rate, traffic source, etc.
Advertisement
Advertisement cookies are used to provide visitors with relevant ads and marketing campaigns. These cookies track visitors across websites and collect information to provide customized ads.
Others
Other uncategorized cookies are those that are being analyzed and have not been classified into a category as yet.
SAVE & ACCEPT
Skip to content